Westbury Lions Club celebrated the 39th Anniversary of its Charter with a black tie dinner and dance at the Standerwick Suite, near Frome.

A popular event in the club calendar, members and their guests were greeted by Club President Peter Baker and his wife Shirley, District Governor Ron Twining and wife Ann, and also 1st Vice District Governor Elect David Merchant (from Newbury Lions Club) with his wife Diana.

Those in attendance included guests from local clubs and businesses, as well as members of the town council. These included Zone Chairman Richard Loverock, Town Mayor Sue Ezra and Councillor Christine Mitchell.

Members and guests enjoying a break between courses!

After a fine 3 course dinner our guests shared a toast to the Queen followed by speeches from the Club President, Treasurer and District Governor. President Peter Baker and Treasurer David Firth were presented with 30 year service awards from District Governor Ron Twining, with Lions Anita and John Drago being presented with special ‘Bee’ awards for their hard work both at club and district level. The presidents cup was awarded to Lion Nigel Coward, while cheques were presented to the local ATC for their assistance over the previous year, and to Mark Sutton and partner Julia Cockram for their support of the recent Paultons Park event in their excellent Star Wars costumes.

The mandatory end of dinner dancing was accompanied by an excellent medley of songs from local duo Us Two, Angie and Rob Fawcett, who kept the dancefloor busy through to the evenings end. 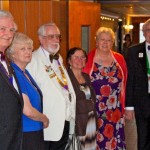 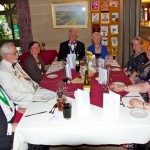 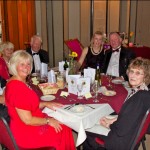 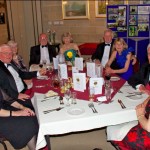 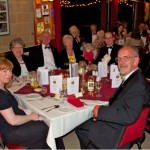 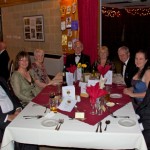 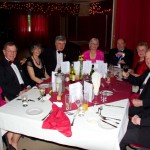 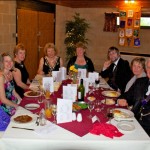 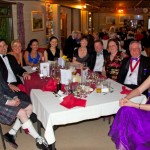 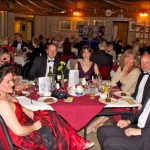 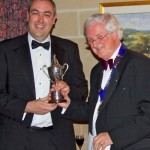 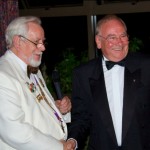 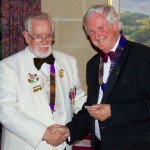 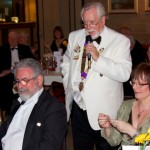 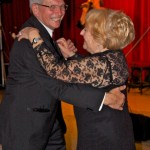